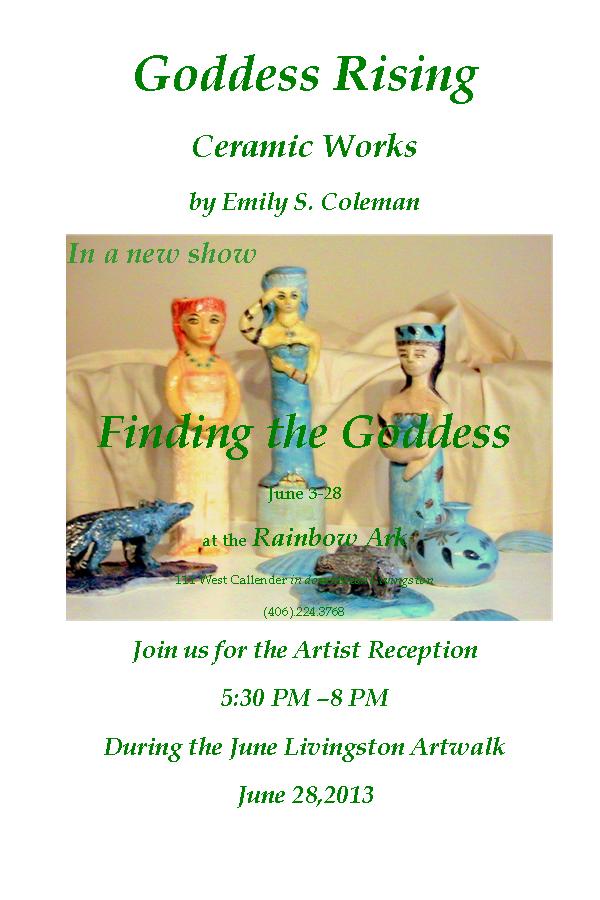 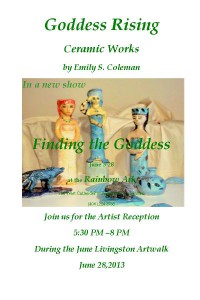 These pieces created for the Finding the Goddess show were created over a few seasons in my studio at Rainbows Landing with friends and family supporting the tasks. The new goddesses emerged as a outgrowth of work developed at Archie Bray and MSU in recent years. These were initially inspired by researching the history of Cretan ceramics and their spiritual connection to early goddess images found by Sir Arthur Evans at the palace at Knossos at the turn of the last century.

Inspiration in clay also evolved from the feminist writings that blossomed in the seventies influenced in part by the publication of the archeological writings and discoveries of Marija Gimbutas who pioneered the revisioning of female history (herstory) through a detailed investigation into the origins of female iconography in Old Europe.

“…Gimbutas’ interpretation of the symbol system of Old Europe constructed a bridge between archaeology and mythology. It became obvious to her that every aspect of Old European life expressed a sophisticated religious symbolism. She came to the conclusion that the art of Old Europe reflected a mythopoetic perception of the sacredness and mystery of the natural world expressed through “a cohesive and persistent ideological system.” C.F. http://www.marijagimbutas.com/archeology.html

Building upon this body of work, many women seeking to restore feminine balance to our culture thus came to perceive the goddess in a more holistic, numinous, and meaningful way. As an artist exploring this theme at Montserrat College of Art in the 70’s, I began to realize the urgent need of women for a more cohesive and healing artistic spirituality than that imposed by the previous centuries of patriarchal oppression.

In  returning once again to the theme of the goddess, I have recently developed through my work , a repertoire of human forms and pots. Pots and the figure have an affinity, as they echo and support each other in both utilitarian and aesthetic ways.  If our creations in art are to have a value beyond the mundane, our figures and pots need to reflect the numinous, as well as the useful.  In works such as Water Muse, the Snake Goddess Teapot, and the Kore sculptures, I am hoping to reflect and explore some measure of dignity and reverence for the female form.

The connection between pots and persons is evident as we look into the kinds of people we revere. Looking back to antiquity, we see that this imagery grew out of our own human need to reproduce our image. But the unconscious is always at work here as we create these images of our psyches out of clay. 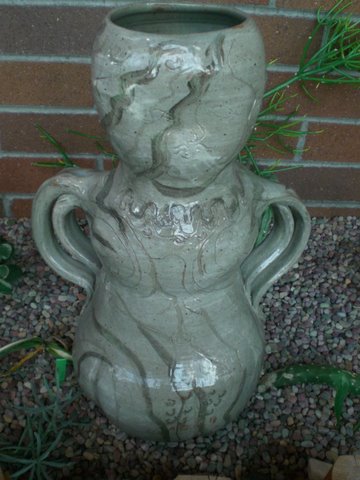 The pieces shown here are a sampling of some musings upon female goddess imagery as it is reflected in our culture, as well as in the cultures of antiquity. I enjoy the trance of throwing as well as the dance of hand building. The glazes are a reflection of my interest in layering of color, abstract design, and glaze combinations. Firing in a variety of atmospheres is key to getting these effects. Building a glaze repertoire is both stimulating and enhancing to the ware and sculpted work. 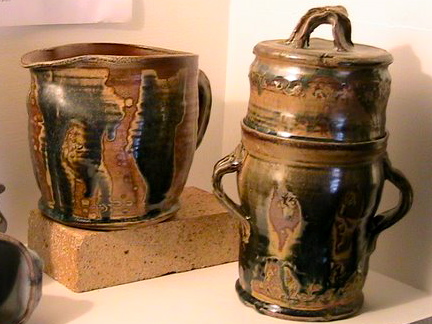 These pieces represent ceramic work done over a period of several years, recently at MSU, and formerly at the Archie Bray Foundation for the Ceramic Arts, where I studied with the residents and community students. I have been interested in the aesthetic and formalistic aspects of the human form and its reflection in the ceramic ware and sculpture since I began my art career at Montserrat College of Art. 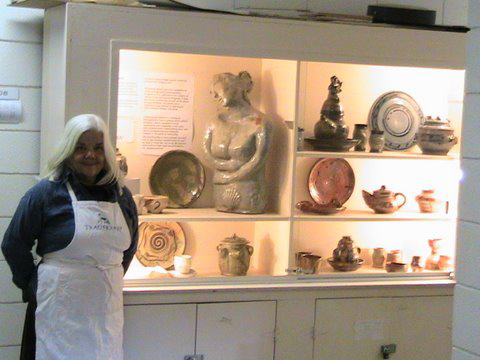